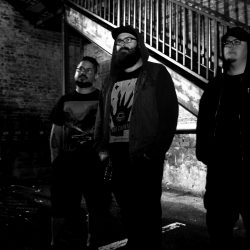 Can you tell us a little bit about the album?

“The whole concept of The Haunted Beach is about exploring the ugliness in paradise. Looking behind closed doors and into the deviant exploitation that occurs in hotel rooms. On the surface we see sunsets, beaches, palm trees but at night when the doors close the animals come out to play. We wanted to make a dark emotional album with some more upbeat danceable elements this time around.” -Tom/vocals

Were there any special guests during studio sessions?

“We had the pleasure of having Andrew Straubel in the studio. He recorded some amazing guitars on Vinyl & The Augurist. Had a very post punk Bauhaus vibe. We also recorded and sampled Valerie Wilson’s phone conversation which we cut into the track Polaroids. After the album was complete we sent it off to Eric Broyhill at Monsterlab for mastering. Eric has worked with the likes of Deftones, Crosses, Far, and Senses Fail. So it was awesome to work with someone of that caliber who really captured our essence and direction.” -Tom/vocals

What kind of things influenced the direction of this new music?

“Pain, lots of pain, depression and trying to persevere through it all. We’ve all been through so much in the past four years. The pressures that life throws at us can be overwhelming. I recently went through a divorce and relocated to Buffalo, NY. So that’s been something I’ve been working through. Sean woke up to a masked man with a knife robbing his studio in the middle of recording this album. There was some definite panic moments there where our album and studio situation were in serious limbo. Tom has been going to therapy for the past few years just trying to cope with having an artistic mind in our modern society.” -Mike/synth

Are there any upcoming tour dates?