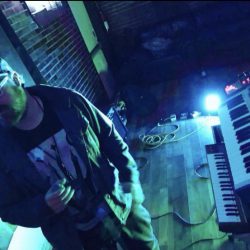 Tell us about the tour?

We just completed a run of 13 shows in 16 days. It was great being in new states and cities everyday.

Who else was on the tour with TRW?

We were out with Impure Reality and the Empty Set.

What was the most memorable show?

We rolled into Providence, RI early as we had just played in Boston the night before. Our friend Jamie had put us up at his place in Cambridge so it was only a short drive. We got to the venue super early so we decided to go exploring. We hit up Swan Cemetery and saw the grave of H.P. Lovecraft. Sean from Impure Reality had a fan girl moment as he’s super into his work. The security guy was really cool as he let us in as the place was closing. After leaving we ate an amazing Mexican meal at Tortilla Flats. That place was bangin. We then went over to Dusk for load in and they were very accomadating to our needs. We played a great show and their sound man did a amazing job dialing in our sound. Also ran into my friend Luke who played bass in my old high school band. It was great catching up with him and grabbing a few beers. We lingered around after packing up chatting with the sound man and he is hilarious, literally had us in tears. After we said goodbye, we hopped back on the road and headed to Portland, Me.

Do you find yourself always looking for great food spots?

Yea it can be a struggle to find good burritos and Pizza. I personally talk to other dudes in bands to find their recommendations. I love hole in the wall places that have that local flavor. I’m not really a fan of the dollar menus unless its taco bell.

What was the best memory of the tour?

We were in New Jersey waiting for load in and it was pouring rain. We had a little impromptu jam session in the back of the van. Tyler from the Empty Set was rocking his ukulele and Sean from Impure Reality hooked his iPhone synth app up to the van speakers. We got a drum loop going on a portable amp and we just free-styled some songs.

Do you have any advice for newer touring bands?

Try to make sure your routing makes logistical sense. Stock up on things like instant oatmeal, cliff bars, snacks and other non-perishables. Always assume you’re not going to make money on tour and if you plan your finances right it can help overcome any inconveniences that may pop up. Having budgets and sticking to them help make touring a lot easier. Also don’t cover your band van or trailer in stickers or with your band logo emblazoned on the side. This makes it an easy target for would be thieves. Don’t leave things like phones, laptops or cash boxes in plain site. Just being aware of your surroundings and using common sense can help avoid unwanted situations.

Does the Russian White have any future tours in the works?

We are currently working hard on our second album The Haunted Beach. Once the album is finished we will have a better idea of our tour cycle. But we would probably be hitting the road again in late summer or early fall. We are gonna try to hit some new areas that we haven’t played before.

Would you like to leave us with any parting words or tour tips?

Always feed the van monkeys, especially if they are watching your gear. Make sure they bath themselves too. Van monkeys can be volatile creatures.